Central Point, Oregon, is a town in Jackson County. It was named for its location at Rogue Valley’s center. Central Point has a population of around 19,000 people. It is located about five miles from Medford, so it’s a stone’s throw from the larger city.

Residents sometimes call Central Point “The First Town in the Valley.” What started as a tiny Southern Oregon village is now a small, but strong town famous for its cheese factory and for being home to the Jackson County Fair. This community also has a museum that really “rocks”: the Crater Rock Museum. There, you’ll find a vast collection of gorgeous minerals, gems, rocks, American Indian arrowheads, and more. The Rogue Valley Family Fun Center is the biggest family fun center in town. It has fun attractions like go-karts, arcade games, bumper boats, mini-golf, and other features. Don Jones Memorial Park is Central Point’s largest park. During the summer season, you can bring your kids to its splash pad, plus enjoy its sports fields and courts, playground, and walking path. Part of this unique, family friendly community contains a section of Bear Creek Greenway, a 20-mile paved trail that also connects to Medford, Talent, Phoenix, and Ashland. The trail makes it simple for you to bike to other towns and view the surrounding wildlife. Seven Oaks Farm operates from July to October. The farm allows you to pick pumpkins and other types of produce. It even offers pony rides for kids. Central Point has five schools for kids and teens: three elementary schools, one middle school, and one high school. Schools for adult students include one community college and one university.

The real estate market in Central Point is made up of mobile homes, townhouses, apartments, and single-family homes. The houses in Central Point have an average of three bedrooms, though there are ones with more or fewer, as well. Most dwellings here were built during the years 1970-1999, making them fairly young, yet well-established. Consider making Central Point your new hometown. It’s historic, family-friendly, and its small population exudes a close-knit feel.

If you have questions about the real estate offerings in Central Point, Oregon, please contact us today.

This wonderful home at the end of a cul de sac has over 1300 sq. ft and features three bedrooms and 1 1/2 bathrooms. Recently remodeled inside with a new kitchen, floorin...

This level lot has a Barn, 2 bay detached shop /garage and a 3 bedroom 2 full bath home with a split floor plan. There is a covered back deck on one side of the ''cabana...

2 Family Set Up or Mother In Law!!! This is an amazing property that has everything to offer in a great quite location between the Table Rocks. Fenced & cross fenced for ...

This beautiful home is located in one of Central Point's most desirable neighborhoods, Jackson Creek Estates. This classic community is a tree-lined scene of beautiful ho...

Corner lot in downtown Central Point. Original home built in 1930 but has been used as various business over the years. Sitting on .20 acre there are 10 parking spots i...

First time on the market in over 100 years, this stunning 16.63 homestead acreage is zoned RR-5 and ripe with possibilities. The original 1920s home is as charming as the...

This property has been in the family since 1968! The main house offers 4 bedrooms, 2 full baths, a recently remodeled kitchen & master bath. There's a 1970's ish mobile h...

Well-located commercial / professional property at high traffic count, signalized corner location in Central Point, OR. This 2,423 SF building on 0.29ac has been occupie...

The data relating to real estate for sale on this web site comes in part from the Internet Data Display (IDX) of the Southern Oregon Multiple Listing Service. Real estate listings held by brokerage firms other than our company are marked with the IDX logo and detailed information about them includes the name of the listing brokers. The information being provided is for consumers' personal, non-commercial use and may not be used for any purpose other than to identify prospective properties consumers may be interested in purchasing. All information subject to change and should be independently verified. Last updated: 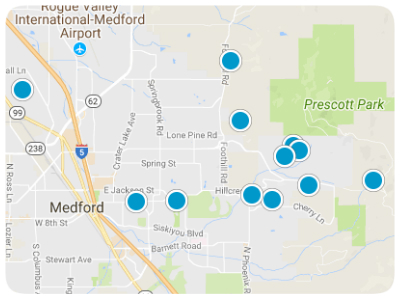